Something Some Folks Should know About School Zones

Note - this is not legal advice, it is however a practical explanation of traffic laws (at least in Texas)

Ok, near me there are some school zones tat are marked improperly.  What they do is they have  a traffic control device (sign) that ends the school zone, but then they have an "END SCHOOL ZONE" sign way after, by Texas law, the school zone ends.

So, here is the problem - the school zone starts with a "SCHOOL ZONE SPEED LIMIT 20" (with some specific times). It means during those times, the speed limit is 20 MPH and you cannot use a wireless device while driving in the school zone. 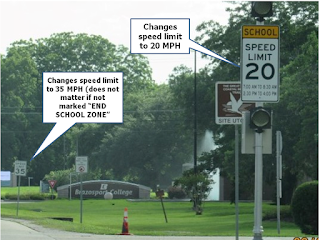 Then you come upon a "SPEED LIMIT 35" sign.  At that point you may or may not be in the School Zone, but the speed limit is now 35 MPH.  There is later a sign that says "END SCHOOL ZONE" and "SPEED LIMIT 35."  Since there is a sign that says "END SCHOOL ZONE" it designates that the area where you cannot use a wireless device is now over, or ended. If it was done intentionally, I smell a speed trap.  If not, well, they may need to remove some unnecessary signs.

Whatever you do out there - Stay Safe!