I just want to say, sometimes you run into "that guy" when you are serving papers.

That guy.  Well, I actually served that guy the other day.  Yes, he tried to employ every one of those tactics.  The one I found most amusing, was the "trespassing" one.  Here is what the place looked like when I approached: 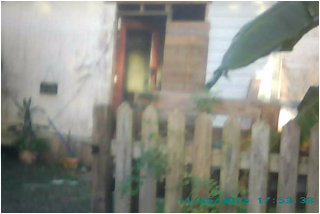 This is a blurry pic - but I didn't want to use a good one, as not to reveal "too much."  However, it is easy to see the open front gate and the fact that th door to the porch is standing open (which I did not go through).

"That Guy" tried to claim he had a "no trespassing sign."   I asked him where, as I never saw one.  Then he pointed towards the house next door and said "It is way down there."

Here is how it went down:

I walked up and knocked on the wall by the open door.  I waited and knocked again.  "That Guy" walked up from inside the house and closed that glass door.  I introduced myself and told him why I was there.  I already recognized the guy from his jail booking photos.

"That Guy" said he didn't know me, he wagged his finger at me, and said "Get off my property."  I told him "OK", then I said "You are served." See that gap above the door?  I slid the papers in there before walking away.  "That Guy" then grabs the papers, opens the door and throws them on the ground.

This began his threats of calling the police - to which I said go ahead.  He then said he was already served and already has a court date - which I told him the date was on the papers and I was not sure what that was. He then complained that I threw something into his house.

It was really not that big of a deal, but he was indeed "That Guy."