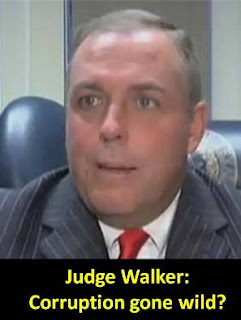 Apparently, in Jefferson County Texas, Judge Layne Walker, has decided either he is the law or is at least above the law.  It looks like something that would be going on in a banana republic, but no, it is happening in Texas.   I have not checked the party affiliation of the judge, as that does not matter.  Government gone bad is government gone bad. There are many accusations against said judge, and his actions as reported in articles, are not professional or are downright corrupt.

Allegedly, the judge had pulled a gun on a process server that was attempting to serve him.  The same judge then incarcerated the same process server for trying to serve the same documents to the judge at the Jefferson County Courthouse.  The server was not charged for anything, until long after he had been in custody.

It seems the Judge is really annoyed at what has been reported by Investigator Philip Klein.  You can read more about this and other things concerning this judge and the complicit sheriff at The Southeast Texas Political Review.

WND has taken notice and has an article about the Texas Judged (sic) Accused of Corruption Goes on Legal Rampage.  It speaks of even more bad behavior that the Judge appears to have been doing.  People often ask how can things get this bad?  When the powers that be either fear or are complicit with a judge like this, it is easy for it to grow into a lawless situation. The Texas Rangers will not investigate without the permission of the District Attorney.  Maybe many turn their head because the Texas Gang Investigators Association has recognized Judge Layne Walker with a state-wide "Ted Poe Damn Good Judge" award for what the group calls his effort to help combat gang activity.  After all, he puts gangsters away!

Just because the judge does one thing you like doesn't mean that the (alleged) flood of ongoing bad behavior should be ignored.

I just could not pass up posting about this.  Whatever you do, stay safe!